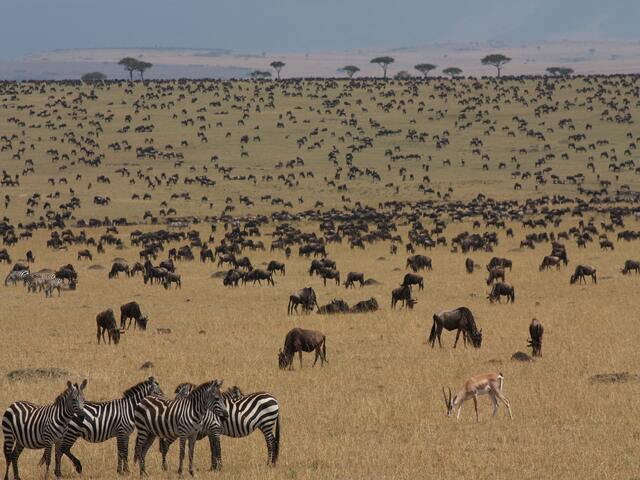 What To Expect In A Safari To the Maasai Mara

One of Kenya’s large national game reserves is the Maasai Mara. In honour of an ethnic group in Kenya called the “Maasai”. This reserve has managed to be one of the seven natural wonders of Africa. Indeed it is a famous wildlife destination in Kenya. It ranges across more than an astonishing 300,000 acres extending to Tanzania’s Serengeti National Park. Moreover it welcomes more than a million animals every year. July to October is said to be the best time to visit Maasai Mara if you want to witness the Wildebeest Migration and let’s find out what you can expect in a safari to the game reserve. A safari to the Maasai Mara is easily one of the best ever experiences you will have in life! The best thing is that you can stay on a property inside this reserve and even camp out!

The Migration of Wildebeests in the Maasai Mara

Hundreds of thousands of these animals leave the Serengeti Park and come during May to the grasslands of Maasai. Mara and this is known as the “Wildebeest Migration”. This phenomenon has been one that thousands of tourists travel to watch.

You are sure to see lions, cheetahs, leopards, elephants, giraffes, zebras, hyenas, wildebeests, and even hippos, crocodiles, and the black rhino if you get lucky. You will also witness more than 400 species of birds. Seeing these animals are definitely a sight you wouldn’t want to miss.

The Wildebeests come all the way to Maasai Mara solely for its green pastures. The landscape here is so beautiful that you are going to fall in love with it instantly. If you are in Kenya and decide not to go on this safari, you are making the wrong choice. Imagine an astonishingly large area of lush green pastures, sounds like paradise! This is why they say that a safari to the Maasai Mara is the safari that you should never miss.

Apart from the wildlife and lush green pastures, you will also meet the local community and you can learn so much about their culture and history. Their handmade food and other items are sure to mesmerize you!

Considering the large area of this reserve, this sounds like the best way to cover everything but all conveniences come with a price so if you can afford it, go for it by all means. If not, a safari jeep could do almost the same thing so that’s a good enough option as well.

Hire A Guide For the Maasai Mara

If you are traveling on your own, it is even more important to be accompanies on these safari trips. And you get a lot more out of the experience too. At Solo Tour Guides, you can hire a tour guide who looks after the safety and well-being of the Solo Traveler. Click here to see who is available.