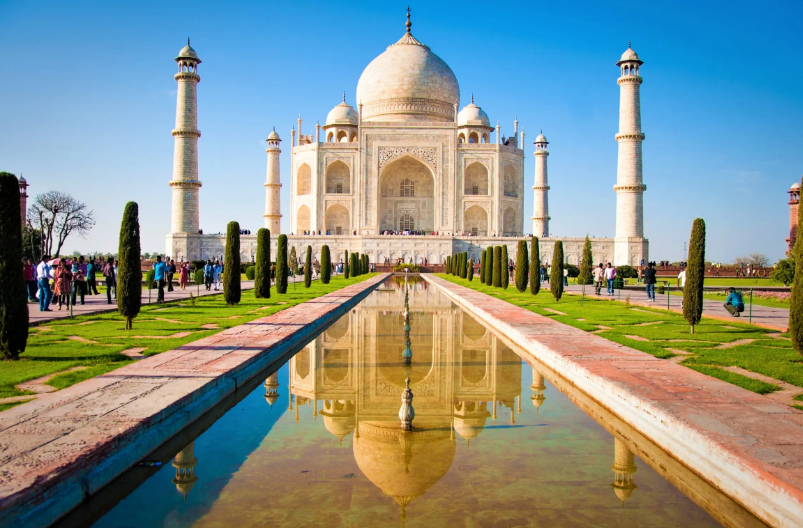 The Taj Mahal is in the city of Agra, northern India. Celebrates the love between a Muslim ruler called Shah Jahan and his second wife, Mumtaz Mahal.

But Mahal died in 1631, after the birth of their 14th child. She is thought to have been about 38 years old, and they had been married for almost 20 years.

When Mahal was dying, it’s said that Jahan promised her that he would build a mausoleum to match her beauty.

Building work started the year after her death, in 1632.

The white marble mausoleum, with its famous arches and five domes, was built where Mahal’s body is buried, next to the Yamuna River. The large dome in its center gives the building its height of 73 metres.

The inside of the mausoleum is a large room that has monuments to Jahan and his wife. Their bodies are buried in tombs under the monuments.

It took about 20,000 workers 22 years to complete the mausoleum and the 170,000 square metres of gardens and buildings around it.

It’s thought that Jahan also planned to build a black marble mausoleum for himself across the river.  With a bridge connecting it to the Taj Mahal. However, Jahan and Mahal’s third son Aurangzeb took power from him in 1658. In addition to that, Jahan spent the last years of his life in prison in Agra Fort, about 2 kilometres west of the Taj Mahal.

It’s always wise to book a professional tour guide if you want to get the maximum out of your Indian experience. They know more about the area than you do as a tourist. Additionally, you will learn so much about what you see than if you were to research on the internet. Better yet? Your safety is also being looked after so you don’t have to worry about whether you are exposed to any danger.

When looking for a professional, make sure they have good reviews and a license or certification proving that they are reliable especially since you are a solo traveler.

One such resource is our very own Solo Tour Guides. Check out the Agra destination page here.