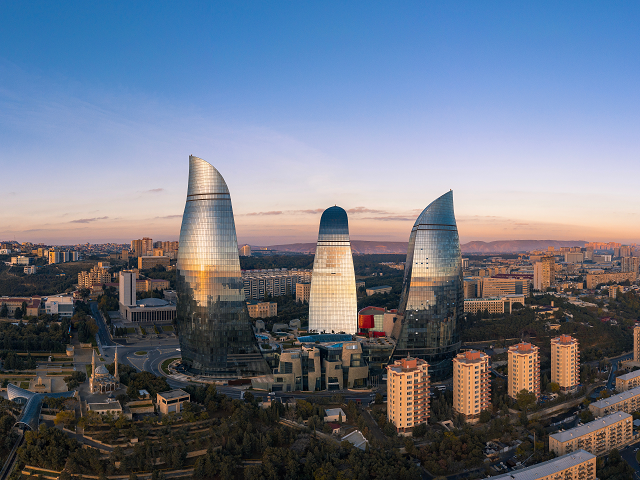 The architectural love child of Dubai and Paris is nowhere but Baku, Azerbaijan! And why is it called so? Simply because there are plenty of Soviet genes hidden in the context. No other city in the world changes as rapidly as Baku. And the east and west blends are more seamless here than anywhere in the Caucasus. The astonishing capital of Azerbaijan with a wonderous 20 km long coastline sure needs more attention from the world.

The warm and welcoming beaches, volcanoes, and a city that never sleeps are where ancient meets modern. The hidden gem of Europe has so much to offer the tourist. So, find out the places that you can include in your travel list to orientate yourself in Baku. Or alternatively book a guide for an orientation tour.

The only park in Baku that offers a magnificent view of the city, Caspian Sea, and the ever famous Flame Towers. In other words, this is your Insta-friendly location in Baku. The viewing platform has many benches so all you gotta do is sit back, relax and enjoy the peace and serenity of the highland park.

The gorgeous Heydar Mosque is a must-visit in Baku. The outstanding architecture of this place definitely seeks your attention. Have a walk around it to view the beauty from different angles. The drive may take not more than 20 minutes from the old city. This already tranquil site is best to visit at night when it is much calmer.

This fascinating monument is at the heart of the old city. Over the years it has grabbed the attention of many scientists due to the fact that the date, purpose, and how it was named is yet unknown. Some believe it was built for protection while some claim that it was a Zoroastrian temple. Care to raise your curiosity? Just drop in and see it yourself!

If you are already at the Maiden tower, walk towards the right side, and.. you are welcome! The eccentric view of the Flaming Towers raising from the old city sure looks flaming for an awesome Insta-click. Maybe you can title it “where the old meets new.”

After UNESCO named it the “Peal of Azerbaijani Architecture” this ancient palace gained a lot of attention from the world. Renovated in 2003 but its original construction dates back to the 15th century. And don’t miss the terrace of the palace.

Whilst it is great to discover a new city on your own, it is also good to have that little guidance. A local guide who can answer all your questions. What are the transport options to move around the city? Where is the nearest supermarket, ATM and medical centre? Where do locals eat? For this sort of information, book a Solo Tour Guide by clicking here. It is a great way to start a holiday as a Solo Traveller.